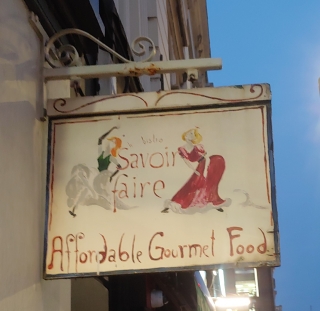 With “Congress” being over and we booksellers sadly, but with gratitude in our hearts, leaving Oxford, I made my way back to London...

...the big book fair, “Firsts London”, would open on the morrow.

Which left me an entire free day.  What to do, what to do...

Teaming up with a good friend and colleague, we decided to just start walking.  He has been in London many times and so had a good sense of the layout of the City and potential destination spots.

We had not walked more than a hundred yards or so when he said – oh, there’s the Pre-Raphaelite church.  My ears immediately perked up…Pre-Raphaelite?  As in Dante Gabriel Rossetti?  As in William Morris?  And Edward Burne-Jones?  I ran up the steps hoping my friend would follow…

…and was immediately stunned upon entering Holy Trinity Church (Sloan Square).  The East Window by Burne-Jones shines like an amazing beacon, a shimmering wall of colour and light.  Side chapels hold other Arts & Crafts treasures, adorning this place of worship with an artistic beauty that is at once as spiritual as it is corporeal.

From there we walked…and walked…and walked (we would end up logging almost 20,000 steps that day).  The streets of London, to my eye, are fascinating – with their history (we passed the house Randolph Caldecott lived in and another Jane Austen visited) and various architectural styles.

Our steps eventually led us into the Victoria & Albert, to which I had longed to return as I had only had a single day there before the Congress.  Today we explored the medieval halls, with their amazing statues and various early Christian icons, carvings and reliquaries.  And how could I leave without visiting the furniture galleries with their displays of Arts & Crafts and Art Nouveau furniture and artwork?

From there it was time to take in the Dorothy Whipple exhibition being hosted by our wonderful colleagues at Maggs Brothers, a London bookselling institution established in 1853.  “The Whipple Line” celebrates the life and writings of Dorothy Whipple (1893-1966), British author who wrote between the wars.  Called by J.B. Priestley the “Jane Austen of the 20th Century”, the exhibition was a tribute to her work and included early rejection letters, letters of praise from publishers, letters to and from her, and examples of all of her published works – in dust jackets, no less!

Last stop of the day was for dinner…we walked and walked some more…considered pub food and Indian food and more pub food….and finally stumbled across Savoir Faire, whose delightful and whimsical sign is pictured here.  Their promise of “Affordable Gourmet Food” was more than fulfilled:  not only was it affordable and gourmet, but it was also delicious.  Their walls were covered with murals in the style of the sign and gave one the feeling of being in Paris during the belle epoque period, with dancing girls and wine being freely poured.  My favourite part of the experience was reading the many witty quotes written on the ceiling, including Albert Einstein’s “Any man who can drive safely while kissing a pretty girl is simply not giving the kiss the attention it deserves.”

Can you tell that I’ve fallen in love with London?  My thanks to the many here who have made me feel so welcome, and have unstintingly given hospitality and graciousness.