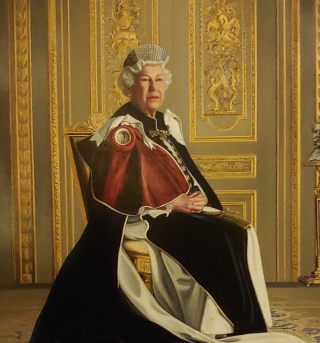 “Have you heard the news?  The Queen has died….”

I paused, midway to having my martini glass raised to my lips.  An unexpected and overwhelming sense of loss washed over me.

The Queen is dead.

Being an American, while I have a great deal of respect for the institution of the monarchy, I never felt a personal connection.  Queen Elizabeth II, however, had clearly been one of those bedrocks we take for granted and never miss until they are no longer with us.

It is a strange time to be in London.  We left the Savoy where we were dining and entered the streets.  Crowded with seemingly every citizen who could either walk or ride, it was difficult to navigate.  The rain poured down, adding its dampness as though the angels in heaven were weeping.

Keep calm and carry on…

Earlier in the day I was determined to visit a London bookstore which I follow on Instagram.  So I wended my way through Kensington Gardens (bidding a silent hello to Peter Pan and being astonished at the lavishness of the Albert Memorial), walking the roughly three kilometers from Paddington into Chelsea.  Lovely buildings on every side….another sign of a Swan! (more long-lost relatives?)…putting the umbrella up for a short squall and then down again…

The shop was a delight.  The World’s End Bookshop was everything I had expected, and Bernard made me feel so welcome that I felt I had returned to visit a long-lost friend.  I made only one purchase – a lovely Vale Press volume – but was tempted by many others.  A return visit may be in the cards for next week!

Partway through browsing I received a text from a good friend and colleague – “I’m at the Sherlock Holmes Pub”.  Flagging down a cab in the pouring rain, a short time later I was sipping a delicious cask ale.  The pub is a treasure, with Holmes memorabilia lining the walls and the black-and-white televisions continuously playing old Sherlock Holmes shows.  What could be better than watching Holmes while sipping an ale in the heart of London?

Being fortified in spirit, we decided to fortify the mind through a stroll along Cecil Court, thought to be the inspiration for J.K. Rowling’s “Diagon Alley” and which is still, today, lined with bookshops and print dealers.  After all, what do booksellers do while on vacation except visit other bookshops?

Of course, right next door is the renowned St. Martins in the Fields….we were in luck, there was a choral performance just beginning as we walked in.  Which perfected the afternoon, our spirits thus being fortified as well as the body and the mind.  As the performance ended an announcement was made for a Bach recital being put on that evening; it was a simple decision to purchase tickets and we left happy, knowing we would return in a few short hours.

Which brings me back to where this short travelogue began.  At the Savoy where we planned to dine before the recital.  Upon which entering was this amazing portrait of the Queen.  Ordering martinis, not knowing that in a few short moments we would receive the news…

The Queen is dead.  Long live the King.