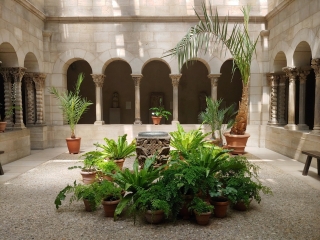 It had been years – decades? – since I was last in New York City.  And then only because a February blizzard stranded me there after a business meeting, with no flights out for several days.

This year, I needed to be in New York for the ABAA New York fair, in order to attend another business meeting; this time on behalf of the Northern California Chapter of the ABAA.  The meeting was scheduled for Friday morning, so the remaining question was – how to fill in the time between the flight in (Wednesday) and the return flight out (Sunday)?

It was a foregone conclusion that I would visit the area bookstores.  And obviously I would “shop” the fair.  And also the “shadow fair”, held that Saturday a mere two blocks from the Park Avenue Armory, the venue of the ABAA fair.

I did shop the area bookstores, including the Strand, and found a few treasures.  I did shop the shadow fair and found one little treasure which is already on its way to its new home.

I did “shop” the ABAA fair and saw some amazing things.  One of the most dazzling was a “miniature book by the 13-year-old Charlotte Brontë, containing perhaps her last unseen poems”.  The book, “A Book of Rhymes”, contained “10 previously unpublished poems”  (n.b., info and quotes from The New York Times).  It sold during the fair.  Selling price?  $1.25 million – and it’s going back home, across the Pond, to the Brontë Parsonage Museum in Haworth, Yorkshire.

But was I going to spend three days in The Big Apple and do nothing but work?

So I asked my good friend and colleague, Chuck Roberts (President, Wonder Book, https://www.wonderbk.com/ ) who loves to travel, for some suggestions.

“A drink at the Algonquin.  The Morgan Library!  Bemelman’s Bar at the Carlyle Hotel.  A drink at the Bull and Bear.  The Cloisters would be gorgeous in the spring.”

Turns out the Algonquin is permanently closed, alas.  As is the Bull and Bear (what is the world coming to?).  And the more book work I did the less time remained for sight-seeing.  But I had promised myself, so on Saturday afternoon, feeling I had worked hard enough and deserved a half-holiday, I hopped into a ride-share and we motored over to the Cloisters – part of the Met, but not in the same location.

“Gorgeous” does not do justice to the Cloisters.  I felt as though I had stepped back in time to the Middle Ages, when life was both simpler and harsher.  The Christian Church was omnipresent; pretty much everyone living in Western Europe and Britain had their lives impacted by it - many for good, but some not.  That omnipresence is well represented in the many statues, alterpieces, items used for the Mass, stained glass windows – even the small courtyards with fountains, in which I felt I could have stayed for hours.

However, once the needs of the spirit were filled, I felt it was time to turn to the needs of the flesh.  I knew Bemelmans Bar was still open, the trick is getting there early enough to find a seat.  So it was a race back to the Carlyle before the bar filled up – I made it by 4:00 p.m. and snagged the final empty seat!  What a joy to sit there and drink in the lovely murals created by Ludwig Bemelmans (of “Madeline” childrens book fame) which covered three walls.  And I can attest that the bar has one of the best charcuterie plates around, accompanied by a lovely Cab which went down quite nicely, thank you.

The next day was travel home.  Thank you, New York, for being such a wonderful and welcoming place to visit.  You have soothed the soul of this world-weary bookseller.