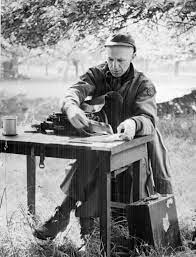 While any war is a terrible thing, often at such times heroism shines through - such was the case with Ernie Pyle.

Ernest Taylor Pyle (1900-1945) covered WWII often telling stories about "ordinary American soldiers". Winner of the Pulitzer Prize in 1944, he was killed by enemy fire during the Battle of Okinawa on April 18, 1945.

We recently acquired one of Pyle's books, Brave Men, published in 1944, the last of his books published during his lifetime.  While we do not usually write a blog about a particular work, cataloguing this volume today, with the knowledge of the war raging a world away in Ukraine, makes the writing immediate and poignant.  We thought you might enjoy reading more about this volume and its interesting association.

Mounted onto the front free endpaper is a vintage sheet of paper, from the prescription pad of a doctor from Sonoma, California, Carroll B. Andrews. Ernie Pyle signed this paper in ink in the middle of the sheet; at the bottom, presumably written by Dr. Andrews, is the date "1-11-45" - just three months prior to Pyle's death. Beneath the date is written "Palace Hotel, S.F., Cal." where the two men presumably met. In addition, laid into the middle of the book is a newspaper clipping titled "Ernie Pyle's Last Column"; written just a few days prior to Pyle's death, it is Pyle's tribute to a friend who had died a short time ago.

Dr. Carroll Andrews is well-remembered in Sonoma; in an article published on August 12, 2021 (found on the web site of the Sonoma Index-Tribune) Dr. Andrew's contributions to the community are enumerated. Dr. Andrews came to Sonoma in 1933 when the only hospital was an a "tiny barn of a hospital" - literally having been converted from an actual barn on a local farm. It was largely through his efforts that two subsequent hospitals were built, in addition to founding the Boys & Girls Club and donating the community center.

Both Pyle and Andrews were heroes, each in his own way. It is a wonderful thing that they were able to meet, however, briefly, on that January day in 1945; a meeting likely remembered by Dr. Andrews for the remainder of his life, bourne out by the clipping of Pyle's "Last Column" which has lain inside the book for these many decades.

It was clear to Pyle when this book was written, as with many others, that WWII was (finally) drawing to a close.  The final chapter of the book, "A Last Word", contains particularly poignant statements which almost bring chills.  Here some excerpts:  "This final chapter is being written in the latter part of August, 1944...the end is inevitable, and it cannot be put off for long...For some of us the war has already gone on too long.  Our feelings have been wrung and drained...

"And all of us together will have to learn how to reassemble our broken world into a pattern so firm and so fair that another great war cannot soon be possible.  To tell the simple truth, most of us over in France don't pretend to know the right answer.  Submersion in war does not necessarily qualify a man to be the master of the peace.  All we can do is fumble and try once more - try out of the memory of our anguish - and be as tolerant with each other as we can."