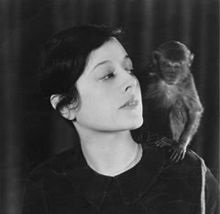 What Do Seduction and a Children's Book on China Have in Common?

Answer:  they were both written by Emily Hahn (1905-1997), a woman of independent spirit who led an unconventional life full of extensive travels which inspired her life-long career as an author.  She attended the University of Wisconsin-Madison, where, although faced with the hostility from some male students and faculty she became the first woman to graduate with a degree in mining engineering from that institution, in 1926.  Hahn began writing for the New Yorker in 1929, and would continue to do so for the rest of her life; her first book, Seductio ad Absurdum: The Principles and Practices of Seduction, was published in 1930.  A humorous look at the ways men court women, Seductio was just the first of many books Hahn would write, often on vastly different subjects and people, but all featuring her force of wit and intellect.

An early feminist, Hahn did not let the conventions of society stop her from travelling, something she often did alone.  She visited and lived in many places, including the Belgian Congo, where she worked for the Red Cross, and Shanghai, China. Her stay in Shanghai, which lasted nearly ten years, had a significant impact on her life:  she met numerous influential political figures such as Mao Tse-tung, and the Soong sisters, three sisters married to prominent members of the Republic of China, who were also the subject of one of Hahn’s books.  She also had affairs with the poet Shao Xunmei (Sinmay Zao), a notable Chinese publisher, writer, and intellectual; and British army intelligence officer Charles Boxer, with whom she had a child, born in 1941.  With the outbreak of the Sino-Japanese War, and, later, World War II, Hahn remained in China as Charles Boxer was captured and held in a POW camp.

Hahn wrote about many of her adventures in China in her autobiography, China to Me.  She also used her experiences in China to write the children’s book The Picture Story of China, illustrated by Kurt Wiese, written for her daughter Carola to teach her about Chinese culture.

Emily Hahn faced life’s challenges with strength and deliberation, continuing to write for the New Yorker even as the Japanese invaded China, and writing about any subject that interested her; her books range from biographies of people such as D. H. Lawrence and Chiang Kai-shek, leader of the Republic of China from 1928 to 1975 (and married to one of the Soong sisters), to feminism in Once Upon a Pedestal (1974), to animal behavior, such as her book On the Side of the Apes (1971).  Indeed, Hahn loved animals, particularly apes, and she even had a pet gibbon named Mr Mills, which she would dress in a diaper and small jacket and take to dinner parties.

Hahn never allowed herself to be easily labelled or catagorised, or allowed herself to be intimidated into silence or submission; she used her writing not only to express herself but also to connect with people, to educate others on those subjects which might be left unconsidered or misunderstood.  Always curious, she lived her life by an oft-uttered phrase:  ‘Nobody said not to go.’