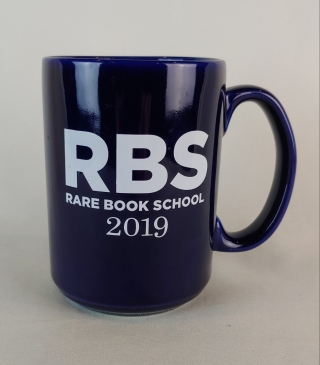 “You really need to go”, he said over a glass of wine.  “You really NEED to take this course.  Now”.

It was February, and I was speaking with one of the staff of Rare Book School (Virginia) during a short break at the ABAA Antiquarian Book Fair in Oakland.  I’d mentioned that I had been thinking of attending for several years, but free time was non-existent and the funds difficult to find and….

So – there.  The decision was made.  Now to make arrangements….

Flash-forward to Sunday evening, June 2nd.  I and approximately fifty of my new best friends were seated in an upstairs room in the Alderman Library at the University of Virginia in Charlottesville.  The room was decorated in the manner of an 19th-century gentleman of means; fitted bookcases lining each wall (containing lovely books), oil paintings on the walls, fireplaces, Persian rugs adorning the hardwood floors.  The Director of Rare Book School, Michael F. Suarez, S.J., was giving us his welcome address; and with his gifts of oratory and genuine love of books, and of those who love books, he gave a rousing speech and made us all feel like family – imbuing in us a burning desire to “learn ferociously”, as he put it.

In introducing the faculty, who were there as well, it was pointed out that many of them have received the prestigious MacArthur Fellows Program prize (commonly referred to as the “Genius Grant”), which is awarded annually to those “who have shown ‘extraordinary originality and dedication in their creative pursuits and a marked capacity for self-direction’ “.  I need hardly say that your erstwhile Proprietor of Swan’s Fine Books felt humble and thankful to be in such company.

Classes were to begin at 8:20 am SHARP the next morning, and we were strictly adjured NOT to even CONSIDER being late.  With only one morning and one afternoon break (and ninety minutes for lunch), we knew it would be a working week:  classes were to be held every day from 8:30 until 5:00.

By now I’m sure you are asking – what in the heck were you studying for such an intensive amount of time?

In our current time we are bombarded with images – both still and moving – that are created in the flash of an eye, using mostly digital means.  Moving images appear almost without thought on our screens, in our homes, on the roadways, in airports, in shopping malls – on the side of buildings…we are inundated.  Still pictures are printed or digitally transmitted by the millions at the touch of a button on high-quality printers, or appearing on our phones, in full colour, with enough detail to hurt the eye.

This is all so different from how images used to be created, especially images that needed to be replicated in order to be part of a published work.  Think about it – until the advent of offset printing and later the computer, how were pictures created, and then replicated so that readers could have those pictures next to the text?

As our incomparable teacher of this course, Mr. Terry Belanger, said (and I paraphrase):  Just because people of the 16th (and 17th and 18th ) centuries didn’t have computers, does that mean they danced naked and painted their faces with wode?  No, of course not.  They were bright, intelligent people who, given the then-current knowledge base and tools on hand, devised multiple and ingenious ways of creating and replicating illustrations – ways which continued to advance and morph with each successive generation throughout the centuries, until the game-changing advent of computers, being available to the common man, in the late 20th century.

So, yes – we spent an entire week learning how images were created and then replicated.  The week began with – a test:  fifty replicated illustrations set out before us, and our task – to determine how they were replicated.  A test which I (and likely most of my classmates) failed miserably; I’m pretty good at telling a woodcut from a wood-engraving from a steel-engraving, but that’s about where my knowledge level topped off.  Unless, of course, the book itself helpfully provided an explanation – one reason I adore long colophons.

The five days of instruction went by in a blur of words, definitions, examples – every manner of creating and replicating illustrations (through 1900!) were discussed:  woodcuts, wood-engravings, etchings, linocuts, mezzotint, aquatint, stippled, white-line, photogravures, lithography, collotype, halftones, chiaroscuro, chromolithograph, pochoir, Nelson prints - and then, just when one thought one understood a process, one was shown examples of work which incorporated two (or more!) of these processes.

One of the strengths of RBS (in addition to the stellar faculty and the incredible staff) is the wealth of primary source material which provides real-life examples of each process being discussed.  When we discussed mezzotints, out came a folder with twelve copies of an actual mezzotint from an actual book, we were each handed one, and we examined this print with our 10x loops or our 30x magnifiers to see, up close and personal, the characteristics of a mezzotint.

We even had the chance to create our own linocuts and etchings – my own attempts were quite amateurish, but the results weren’t really the point of the exercise – it was DOING what others had done to create their works that mattered.  It was seeing the results of the linocut when a proof copy was pulled, or the etching once the plate had been bitten, that burned into our minds the reality of the process behind the written description.

So guess how we ended the week?  Yes, with the same test as we took on Monday morning, with the same fifty samples of replicated illustrations which we were to examine and identify, determining the process(es) used to replicate them.  I am pleased to say that I was no longer a miserable failure, although I also did not quite score 100%.  Clearly I have embarked on a lifelong journey of learning and being able to identify illustration processes.

Mine was only one course offered among several – some friends who were attending the same week as I were taking a course entitled “The Printed Book in the West to 1800”, others studied “The Identification of Photographic Print Process”.  You can see details on RBS and their complete offerings on the RBS web site, www.rarebookschool.org .

So, who should attend Rare Book School?  Many of those in my class were special collections librarians; some were professors, a couple, such as myself, antiquarian booksellers.  In other classes that week there were collectors, more librarians, more booksellers.  In other words – any lover of the printed book who wishes to gain an in-depth, thorough understanding of the particular aspect of the book that is being presented in any particular course – should go and will benefit.

Just one woman’s opinion.  Shared, I know, by the thousands of graduates of Rare Book School from the almost four decades of learning, since its founding in 1983.  So – go, just go.