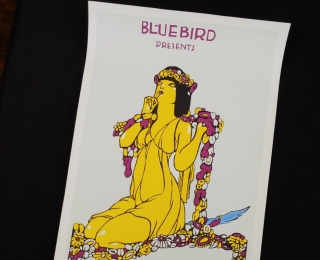 This year marked the one hundredth birthday of Bay Area poet and proprietor of City Lights bookstore Lawrence Ferlinghetti; a prominent writer during the San Francisco Renaissance, Ferlinghetti also worked to publish and promote the work of the Beat poets, and City Lights continues to publish works of local authors and poets to this day.

Another Bay Area poet, William Everson, also known as Brother Antoninus, was a writer and printer deeply involved in the San Francisco Renaissance.  His small press, the Lime Kiln Press, produced fine-art editions of his own poetry and the work of those poets Everson himself admired.  This includes the poet Robinson Jeffers, whose poems, often narrative in style, express his anti-war stance and his own philosophy of “inhumanism”, emphasizing the beauty of the natural world.  Jeffers spent most of his life in Carmel, California, and composed stunning collections of epic narrations in books such as Be Angry at the Sun and The Double Axe; a leading figure in the environmental movement, his writings and ideas influenced numerous poets, such as Gary Snyder and Charles Bukowski.

The Beat poets, originating in Greenwich Village in New York City, brought the movement to San Francisco:  the famous Six Gallery poetry reading in 1955 is said to have marked the beginning of the Beat movement.  The Beats emphasized the avant-garde and oral performances (see "Bluebird presents", a poster commemorating a reading by Lawrence Ferlinghetti and Jerry Kamstra, shown to the right at the end of this article) as a way to experience poetry.  Strongly influenced by Eastern religion and poetry, poets like Kenneth Rexroth, Jack Kerouac, and Allen Ginsberg incorporated the rhythms and observations of nature found in the haiku into their work.

The poets during the San Francisco Renaissance often wrote on subjects of free love, of spirituality and Eastern religions, of eschewing materialism in favor of the natural world; poetry served as both an exploration of the self as well as something artistic to share with others.

Poetry always has a spirited power, and obligation to that power, to change communities, to change ideas; good poets know the power of the word to shake society, politics, and people.  The Bay Area poets knew this, that ideas must come together in a dazzling array of words, whether yawp or howl, to sing something great.  To impart meaning is to become a part of that meaning, to speak to the deepest thresholds of the human soul.