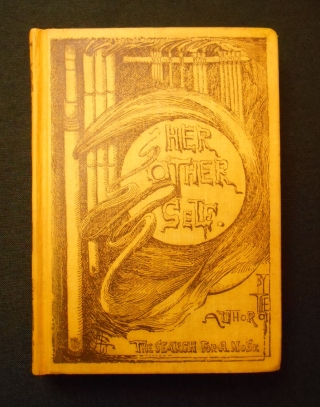 In the eighteenth and early nineteenth centuries (and likely earlier) it was not uncommon for a woman to publish her work either under a pseudonym, such as Mary Ann Evans (1819-1880) publishing as George Elliot; or anonymously such as Jane Austen (1775-1817) whose incredibly popular work, Pride and Prejudice, simply stated on the title page “By the Author of ‘Sense and Sensibility.’“

While I’m sure there were several reasons for not having a woman’s name appear on the title page, among them it not being socially acceptable for a married woman to write, the sad fact is that unless the author was deemed “important” at some point, there was a risk that her name would be lost over time to obscurity.

Being an antiquarian bookseller, it’s amazing how many bits and pieces of history have crossed my desk over the years.  While I must, at some point, sell the books in order to pay the bills, I also regard myself as a guardian between owners; I believe that these books, many of which are special in their own way, often have a story to tell…if we will just stop and listen.

Recently, Swan’s Fine Books acquired a volume with a wonderful, other-worldly binding design. 1  The title is Her Other Self, published in Washington by The Neale Company in 1901 (note that the copyright was also registered to The Neale Company).  As with Ms. Austen, the author was noted simply as “By the Author of The Search for a Nose”.  Hoping for more information, I went to OCLC and searched….but the few libraries holding Her Other Self  listed no author, and my search of OCLC turned up no copies of The Search for a Nose.  One colleague checked the Neale bibliography - the entry for Her Other Self shows the author as anonymous.  Another colleague checked the Library of Congress records for the two copies sent for copyright, which also lists no author known.

Fortunately, our copy contains a presentation inscription by the author; what I was searching for was confirmation and additional information.  I was curious as to why she was not credited anywhere that I could find as being the author of this work, which contemporary advertisements touted as “A Strange Story of a Dual Personality….Young, innocent, and beautiful girl becomes the victim of a most mystifying mental phenomenon…Rivals in its thrilling development and intense and sustained interest Stevenson’s ‘Dr. Jekyll and Mr. Hyde.’ “ 2  Not every contemporary reviewer agreed with this assessment, as we also found this scathing review:  “[t]his is an improbable, sensational story, presumably dealing with occult philosophy.  It is a book that one opens with expectation and closes without profit.  [It] fails in its purpose...” 3

Finally, after searching through many web sites and countless newspapers, I was able to piece together parts of the story of this most remarkable woman, May Whitney Emerson.

Born in Eagle Harbor, New York, she was educated at local schools and attended Cornell University.  At the age of 18 she entered the National Academy Design and “won every prize which the society could give to a woman”.  In 1882 she married Dr. N.W. Emerson of Boston, which may be why this book was published without her name appearing – being a married lady. 4

May Whitney Emerson did more than just write.  She was a world traveler, visiting Palestine in 1899, where she was injured in a horseback accident. 5  In 1916 she started a film company run by women, and served as its president. 6  Sadly, the film company did not succeed, for early in 1917 the company was reported as having declared bankruptcy 7 , and the following year, early in 1918, the United States District Court found that May Whitney Emerson retained her rights to one of the scripts contemplated by the company. 8

A side note which gives us a glimpse into her character is a rather lengthy article in the Los Angeles Times 9, Ghost of Heidelberg Comes to Life Here…Woman Who Set World Agog by Impersonation of “White Lady”, Whose Appearances Forewarn Hohenzollerns of Disaster, for First Time Reveals Secret of Hoax that Preceded Seven Tragedies.

The article relates how, as a young girl studying art in Germany with a friend, she donned the outfit of the “Ghost of Heidelberg” whose appearance, according to local legend, foretold death or other calamities for the ruling family of Germany, the Hohenzollerns.  What was intended as a prank turned serious when a group of locals, seeing her and believing her to truly be the wraith gave chase to the point of certain gentlemen “discharging pistols”.   Being frightened of the mob and not wishing to divulge her part in the event, she was as surprised as anyone else when actual deaths within that family began to occur.  She only shared the story years later, when it appeared in this Los Angeles Times story.

One cannot help but wonder if it was not this prank, in part, which gave May Whitney Emerson the inspiration for this book, Her Other Self.  In any event, I am pleased that this book, with her presentation inscription (see below) found its way to my desk so that, well over 120 years after its publication, her name can be associated with it and she can receive due credit for her work – whether one likes or dislikes the story, it is her story.  That ought not to be taken away from her or lost in the mists of time.

4 Information and quote from Who’s Who in New York City and State, Issue 3, Who's who Publications, Incorporated, 1907.