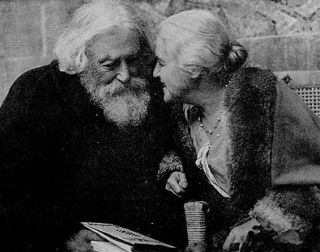 Born thirty years apart, these two had more in common than one might think.

Sara Bard Field (1882-1974) was dedicated to liberal causes and civil liberties.  Born into a staunchly religious household (her father was a Baptist whose "puritanism spread like a cloak over everybody, a dark cloak") she would initially marry a man much like her father; an older man, a Baptist minister, a friend to the family.  Not surprisingly, the marriage would not last; Field became dedicated to political causes shortly after the marriage and "discovered the evils of the inequality of women, the 'slavery of greed', child labor, and war in which 'the young men, the sons of Mothers, are sent out by the millions to die for Profits'."

Charles Erskine Scott Wood (1852-1944) graduated from West Point in 1874, going on to serve in the Nez Perce War in 1877 as a lieutenant.  As a participant in that war, he met Chief Joseph of the Nez Perce and was present at his surrender; it was Wood who transcribed Chief Joseph's speech, now famous, which ends with "My heart is sick and sad.  From where the sun now stands, I will fight no more forever."  The two men formed a life-long friendship.

As an interesting side note in literary history, in 1881 Wood was serving as an adjutant to General O.O. Howard at West Point when he met Mark Twain.  Wood contributed to literary history by allowing Twain to use his printing press to print fifty copies of his then-banned 1601, copies of which are now "legendary" amongst book collectors.

Wood settled in Portland, Oregon, with his first wife; a few blocks away lived John Reed who was influenced by Wood, who by this time was an attorney defending "radicals" such as Margaret Sanger (an early activist for birth control) and Emma Goldman, and advocating for civil liberties for anti-war protesters and birth control.

Sara and Charles would meet through an introduction by none other than Clarence Darrow in 1910, while both were still married.  In 1913 Field moved to Nevada briefly to obtain a divorce, and in 1915 moved to San Francisco.  The two kept in touch, for in 1918 she moved in with Wood, whose wife refused to grant him a divorce.

In 1925 they built a home in Los Gatos which they named "The Cats", where they welcomed numerous literary and politically active men and women such as John Steinbeck, Robinson Jeffers, Ansel Adams, Chief Joseph, Margaret Sanger, and many others.  They would eventually marry in 1938 as Wood, then being 85 and his first wife having passed away, wanted to ensure Field would receive the inheritance he intended for her.

Both Field and Wood were authors of mostly poetry, with Field's first book of poetry being published in 1927, entitled The Pale Woman.  Wood also wrote poetry, although he is best known for "Heavenly Discourse", a collection of essays originally written at the request of John Reed and Max Eastman for their radical journal The Masses.  Their poetry would appear together in a 1937 publication printed by Edwin and Robert Grabhorn, financed by their friend Albert M. Bender; entitled simply Selected Poems, the first section includes seventeen of Field's poems, followed by thirteen poems by Wood.

We find the life stories of Sara Bard Field and Charles Erskine Scott Wood to be strangely compelling.  Both as individuals and as a couple, they had an immense influence over the politics and literature of their day.  We can all take heart from this and, in whatever way seems best to each of us, take action to make the world a better place.