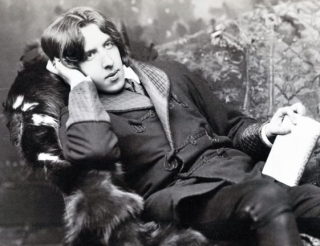 Oscar Wilde...A Man Who Lived Life
on His Own Terms

How complicated we all are.  Oscar Fingal O'Flahertie Wills Wilde (1854-1900) loved poetry and art, and lived his life to the fullest in pursuit of such.  While most of us remember Wilde today for his only novel, The Picture of Dorian Gray (published in 1891) and his play The Importance of Being Earnest (published 1895), he was a deeply passionate man, flamboyant in manners and dress, with a keen mind along with a wry sense of humour (who has not heard his famous quote "I can resist anything except for temptation").

Born into a literary family, Wilde attended both Trinity College (Dublin) and Magdalen College (Oxford), earning there a degree with honours; during his time at Oxford he also won the Newdigate Prize for his long poem, Ravenna.  As with many of us, his years at college helped to shape his personality and self-image.  Deeply impressed by the teachings of English writers such as John Ruskin on the importance of art in life and, more importantly, the aesthetic intensity by which one should live one's life, Wilde became an ardent participant in the Aesthetic movement, and "established himself in social and artistic circles by his wit and flamboyance."

Although Wilde married and had two children, he formed a deep attachment to Lord Alfred Douglas.  Accused by Douglas' father of being a sodomite (a crime in those days), Wilde sued Douglas' father for libel - an act which, when Wilde lost the case, would result in imprisonment for two years at hard labour, which would weaken his health from the harsh conditions and emotional isolation.

Serving most of his sentence at Reading Gaol, Wilde was deprived of the ability to write; however, a sympathetic prison governor allowed him paper and pen and, during the three months of January through March of 1897, he would write the long letter to Douglas which would be published as De Profundis ("from the depths").

For anyone who has ever loved a fellow human, one cannot but be moved by Wilde's letter to his former lover.  The letter opens "...Suffering is one very long moment.  We cannot divide it by seasons.  We can only record its moods, and chronicle their return.  With us time does not progress.  It revolves.  It seems to circle round one centre of pain...For us there is only one season, the season of sorrow..."

The suppressed portion is full of not only self-recrimination, but an enduring affection for the young Douglas:  "After long and fruitless waiting I have determined to write to you myself, as much for your sake as for mine....Our ill-fated and most lamentable friendship has ended in ruin and public infamy for me, yet the memory of our ancient affection is often with me, and the thought that loathing, bitterness and contempt should forever take place in my heart once held by love is very sad to me..."  The letter opens with "Dear Bosie" and would be signed "Your affectionate friend, Oscar Wilde".

While we lament the tragedy of Wilde's early death, at the too-young age of 46, we are all made better by the writings he has left; his ability to peer into the depths of the human soul and see both the ugliness and the beauty, and of most importance, the truth of what it means to be human.

N.B.  Above information taken mostly from the online Encyclopedia Britannica and the Oxford Dictionary of National Biography (with a small dash of Wiki thrown in).