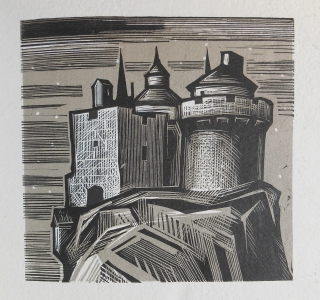 There are many Russian fairy tales that begin with three brothers set upon a task. Often the youngest brother, being the most naive and pure of heart, is the hero who rises from the challenges of the journey. In many ways, that is how a book artist is born, especially in the case of Russian book artist Dmitry Sayenko. Born in Kiev in 1965, Sayenko was instilled with a love for book illustration by observing his father, a book illustrator himself. He went on to graduate from the Mukhina Art School, in St. Petersburg, where he currently lives, teaches and works as an artist.

Like the youngest brother in our fairy tale, he was offered the chance to undertake a project, the details and dangers of which were unknown to him at the time. This first book was a Russian ABC book for children, based on Russian proverbs, riddles, and tongue twisters. This seemingly innocent commission began in 1993, a project he would go on to call “my great madness.” He had no idea what that project would eventually entail, and it became the proverbial “dragon” he would need to defeat before he would engage in book arts seriously and professionally. Unfortunately, the publishing house that had commissioned the project went bankrupt shortly before its completion, and Sayenko was left to complete it himself. Three long years later, he came out from the woods with his first completed work, going on to be the king of his own little country.

For the past twenty-two years, Dmitry has produced many beautiful books, establishing his own aesthetic and fine-tuning every detail of his work with his own hands. He has exhibited at book fairs internationally, and found admirers and buyers from many different private and public locales, including museums, state and university libraries, and private collections, such as the Russian National Library, the Staatsbibliotheck, the Victoria and Albert Museum, the Birmingham Museum of Art, the Van Abbemuseum, and the Eoun-ho Kim Collection, among others.

His books tend to fall into two categories: books in which he illustrates an original text by an author he admires, or books in which he writes the text and illustrates it. He often picks texts that appeal to his heart, such as Edward Lear, Sappho, Pushkin, or extracts from religious or medieval scripts. They are printed for the most part in English, because of the international market he speaks to. He admits that “each of my books is a confession of why I love them.” He sees the work as a conversation between the heart and the warmth of the hand.

Sayenko’s books are made completely by hand in small editions of about 7-15. He cuts the blocks for the illustrations himself, sets the type and prints the book, binds the books himself, and in recent years he also hand-makes the paper. He believes each part of the book should flow together in a circle: its own living organism. His work is influenced by the medieval books he so esteems, as well as the Russian Lubok and Avant-garde. He works on one book at a time, allowing himself to be fully immersed in that work until its completion, sometimes so much so that he claims he finds it difficult to emerge from that state. Each copy of an edition will vary slightly, as he allows himself to experiment, holding the art above the mechanical details of the execution. By printing such small editions he is able to put an incredible depth of detail and the highest quality of craftsmanship into each book.

The organic unity of text, illustrations and materials in Sayenko’s books have a heroic warmth and life that have to be experienced to truly comprehend. He thinks of his books as his children, none held in higher regard than the other. Some of his recent works include Legendary Heroes: Myths and Realities, a book chronicling several famous myths in comparison with the underlying historical truths; and Unicorn Histories, a short story by Mary Bartlett about those mysterious mythical beasts. In Venetian Stanzas, Sayenko presents for the first time a new translation of Brodsky’s poetry from Venice in 1972. Brodsky’s quote about Venice is profoundly appropriate and applicable to any work by Sayenko:  "All of Venice is a work of art, a place where you distinctly understand that something made by human hands can be far more beautiful than humans themselves."