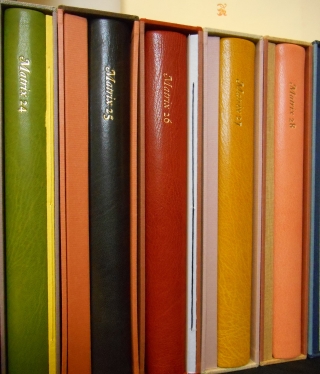 Matrix is known throughout the Bibliophile world for its quality and presentation of printing and illustration arts.  John Randle, publisher and owner of the Whittington Press, shares some thoughts regarding how it got its start.

The seeds of Matrix were sown by two items which needed to be published, but would not in themselves stand up as individual publications: the diary of a pressman at the Shakespeare Head Press from 1928, and Brocard Sewell’s recollections of working with the printer-engraver Edward Walters at about the same time. These two seemed to set the tone for Matrix, which has seldom strayed pre-1900. Its priority has become to record events while their perpetrators (or their heirs) are still with us, rather than rake over the ashes of already-recorded events.

It then occurred to me that if we were to put these two together with a few other items, the result may have a wide enough scope to interest people in investing in the result. We kept ‘Whittington’ out of the title as I did not want to give the impression that it was a house journal for the Whittington Press, in fact all mention of the Press was banned until relatively recently. ‘Matrix’ was chosen as the title as the 72-point Caslon swash M would look good on the masthead. To keep costs down and keep it all under one roof we bought a Monotype caster and keyboard, some ingots of lead and a 12-point Caslon die-case (all for less than the local typesetter’s estimate for doing the whole job), and Matrix became the first job to be cast at the Press, and made its appearance in 1981.

It was subtitled ‘A Review for Printers & Bibliophiles’: ‘Review’ because this suggested echoes of reviews such as the infamous Little Review which flourished (though they did for six months have to camp by the shores of Lake Michigan) in Chicago from 1914-26, and could claim Pound, Eliot, Joyce and Hemingway between their brilliant Dadaist covers; ‘Printers’ because this was to be a journal for printers, from printers, printed from type on a 1936 Double Crown Wharfedale cylinder press; and ‘Bibliophiles’ because it was also aimed at those interested in books and their contents.

Optimistically, we placed a single quarter-page advertisement in Fine Print, which I had recently visited in San Francisco and been impressed to see the number of keen lady volunteers working happily away in Bush St. This proved prescient, as about a third of the edition crosses the Atlantic, and American support, both financial and editorial, has proved crucial. We priced Matrix 1 at £10 a copy and it quickly sold out, though I did give quite a few away, fearing it would suffer the fate of many small journals and, like the Australian Wayzgoose in 1985 and Fr Brocard Sewell’s The Thing of 1939, fail to make it to the second issue. This was encouraging for the novice publishers, though I had learned from my experience working with Fleet Street journals in the 1960s that a well-informed journal is, unlike book publishing, an attractive source of regular revenue, if only one can keep up the momentum and never have to scrape the barrel for content.

Matrix is now at its thirty-fifth issue. Far from having had to scrape the barrel, the problem has always been to keep the length of issues within the capabilities of the Press. On the whole we have kept up the annual cycle (the number happily coinciding with the year), though with some considerable effort – just sending out close on 1000 copies worldwide, in a mix of regular and special editions (the specials are quarter bound in coloured leathers with marbled papers) is no mean logistical feat, not least for Rose who has to keep track of the orders. Lately, Matrix has had to give way to other large projects taking up their share of press time, and has lagged a little, though I was encouraged to read recently that there was a gap of twenty-five years between the last two issues of Rocky Stinehour’s journal Notes on Printing & Graphic Arts.

Matrix has now been with us for thirty-five issues, and it is hard to imagine life without it. One never stops thinking about possibilities for the next issue. Our subscribers and contributors have been a model of forbearance and generosity – we used to pay the latter a modest honorarium but finally stopped when so many expressed surprise at receiving their cheque, so instead we try to be generous with the quality of the offprints of their articles, which indeed are appreciated.

As many have discovered, editing a small review is a rewarding experience. Everyone enjoys being associated with it: readers enjoy being entertained, and people like to see themselves in print. As long as the initial effort of getting the flywheel turning proves productive, and worthwhile contributions continue to flow in, a momentum is generated than carries the whole circus forward year on year.

Lifting eight-page formes on and off a Heidelberg cylinder press twice a day is heavy work, and I was glad of Patrick’s help with Matrix 31 in 2014. He has taken to the Heidelberg SBB as I took to the Wharfedale SW2 forty years earlier, on which the first four issues of Matrix were printed until the run outstripped the speed of the machine, and he has even suggested reprinting the thirty earlier issues with decent inking and impression. Meanwhile, no doubt tired of my obsession with the legacy of William Morris and the twentieth-century typographical renaissance, he has now taken to printing his own annual Double Dagger on the Heidelberg, a multi-colour tabloid celebrating the integration of hot-metal type with digitally cut ornament and illustration. He has recently completed the run of 4400 copies of the second issue, involving some 250,000 impressions. As we found with Matrix, number two is the key issue, it shows whether or not the series is intended to continue. Thus far, the omens seem good.