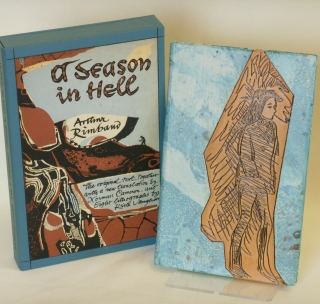 A Season in Hell

Arthur Rimbaud, a young French poet in the second half of the 19th century, is known as one of the "grandfathers" of Surrealism, and yet - we don't hear about him often enough. Today we would like to highlight this very singular literary mind and bring attention to how his work helped shape poetry, and culture, as we know it.

Jean Nicholas Arthur Rimbaud was born on the 20th of October, 1854 in a small town in provincial France, the second of five children. Early on in his life his father deserted the family, and his mother was hardly an agreeable companion - quite severe and a devout Catholic, and utterly lacking in any sense of humor. Due to a rigid upbringing, Rimbaud became something of a rebel in his teen years, a feeling which would be quite apparent in his work. By the time he was 15 he had begun to show promise as a poet, and one of his teachers became a mentor and friend to whom Rimbaud would write of his feelings about wanting to escape. In his later teen years Rimbaud ran away from home several times - living on the streets as a vagrant before being returned home to his mother. When he was 17 he wrote to several poets asking for advice on his poems, but only one poet responded - Symbolist poet Paul Verlaine. Verlaine invited Rimbaud to come and live with him and his 17 year old pregnant wife, which Rimbaud did in September of 1871.

Verlaine and Rimbaud formed a fast friendship, which soon blossomed into a romance. Their relationship was a tumultuous one, resulting in scandal and gossip. They separated, but came back together in 1873 when an inebriated Verlaine, overcome with emotion, shot Rimbaud in the wrist. Though they tried to cover the shooting up at the hospital, the next day Rimbaud became afraid that Verlaine would try to shoot him once more and told a policeman the truth. Verlaine was sent to prison for two years for the crime, and Rimbaud returned home and continued to write poetry. During his time with Verlaine, Rimbaud's poetic style, though remaining quite obscene and/or shocking in nature, was heavily influenced by the wistfulness of Verlaine's work. However, despite the influence Rimbaud continued to work toward his eventual final style - being one of the very first poets to write completely free verse, void of any rhyming or conventions.

Rimbaud continued to work over the next three years or so, publishing a few stand-alone poems until 1875, when he virtually gave up his writing and wild lifestyle in favor of travel, obscurity and freedom. Rimbaud lived and worked in Cyprus, Yemen and Ethiopia over the coming decades, working several odd jobs as a construction foreman and a merchant. In 1891 Rimbaud developed what was (wrongly) assumed to be arthritis in his right knee, which led to intense pain and the eventual amputation of the leg. Unfortunately the cancer that was in the bone had spread throughout his body and he passed away in November of 1891, at the age of 37, in Marseille.

The question on everyone's mind, of course, is why Rimbaud would abandon literature at such a young age (only 21) and after so little time? Scholars agree that Rimbaud seems to have been burnt out on the literary scene and persona he had created for himself, and gave a hearty farewell to poetry and literature in his publication (which he convinced his mother to help finance) of Une Saison en enfer in 1871. The last nine sections of the book act almost as a "swan song" (Poetry Foundation) for Rimbaud and definitely give the reader evidence of RImbaud's upcoming abandonment. Much of his further work was published in a compilation by Paul Verlaine in 1895, four years after his death.

Though we will perhaps never know why Rimbaud would choose to give up on his writing talent, we can agree that his few years of work and utterly defiant lifestyle have given inspiration to many. Albert Camus, famed philosopher and author, hailed Rimbaud as “the poet of revolt, and the greatest”.  His influence is almost indescribable:  his style and syntactical choices pointed to Symbolist tendencies, Dadaism embraced his ability to write in abstractions and impossibilities, and Surrealists embrace Rimbaud  as a predecessor.  So many have looked to his life and works for their inspiration, including the British composer Benjamin Britten, American composer Harold Blumenfeld, Bulgarian composer Henri Lazarof, and German composers Georg Katzer and Andreas Staffel – to name just a few.  Later in the century, Rock musicians Bob Dylan, Jim Morrison and Patti Smith would pay tribute to Rimbaud and author Octavio Paz, winner of the 1990 Nobel Prize in Literature, viewed Rimbaud’s importance to his own work equal, or perhaps even greater than, Mallarme and Baudelaire  (N.B., from Wiki).

Will we ever understand Rimbaud fully?  Perhaps, perhaps not – but we revel in the stark beauty of his poetry and are thankful for his life, which while short, burned so brightly.