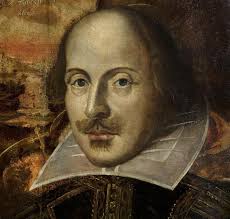 A Salute to the Master of Iambic Pentameter... William Shakespeare!

Shakespeare is a household name in almost every country around the world. Why? His work is some of the best examples of Elizabethan writing that have been preserved through the years. However, his life has become something of a myth. Too often we hear stories of Shakespeare's life that we think cannot possibly be true! How can one man have written so many delightful plays, poems, sonnets... that have lived on for over the last 400 years and are still taught and analyzed?

According to records, William Shakespeare was baptised on April 26th, 1564. We can, of course, assume that he was born a week or so prior, in the small town (that now owes much of its success due to his tourist following) of Stratford-upon-Avon, England. Much of his early life (and later life, come to think of it) is based on what scholars agree must have happened. However, we do know that he was the eldest surviving son of eight children. When Shakespeare turned 18, we know that he married the 26 year old Anne (or Agnes) Hathaway from a village neighboring Stratford. It is interesting to note that Hathaway was already six months pregnant with their first daughter, Susanna, at the time of the wedding. The couple gave birth to twins two years later, Hamnet and Judith in 1585.

Almost 10 years after the birth of his twins, in 1592, William Shakespeare is mentioned as part of the theatrical scene in London in 1592. Scholars usually refer to the decade of his life not recorded as his "lost years", but they are correct in the fact that very little is known about Shakespeare's life during the first eight years of his children's lives... some argue that he was a local schoolmaster, some that he lived in London for those many years to avoid being prosecuted for deer poaching on a neighboring estate. In any case, most scholars agree that these years in Shakespeare's life is when he must have begun writing for the stage, as the next knowledge of him that we have he is already a well-known playwright.

By 1592 it is mentioned that several of Shakespeare's plays were being put on in London. Only a couple of years later the Lord Chamberlain's Men (which became the "King's Men" after they were awarded a royal patent by King James I) were performing each of Shakespeare's plays. In 1599, a few of the members of the 'King's Men' went in on a purchase of land on the Thames and turned it into a circular theater (common for the times), naming it "The Globe". Here, many of Shakespeare's plays were performed surrounded by an audience almost the opposite of what you see in a theater today. The cheapest tickets were in the orchestra, standing up next to the actors, and the higher paying seats were located up in mezzanines above the stage.

By 1598, Shakespeare was a prominent and very well-known figure in the theater scene, and his name began to be published on the front page of local papers. Though an owner of the Globe, Shakespeare continued to act in his own productions, his name appearing in newsprint up until 1623 as either producer or actor in his productions. Throughout his time as actor and playwright, Shakespeare continued to visit home in Stratford-upon-Avon (and after his family began moving to St. Helen's, Southwark and to an area north of St. Paul's Cathedral) and see his wife and children.

More on Shakespeare's life, writing and controversy around his work coming up next time! Stay tuned...