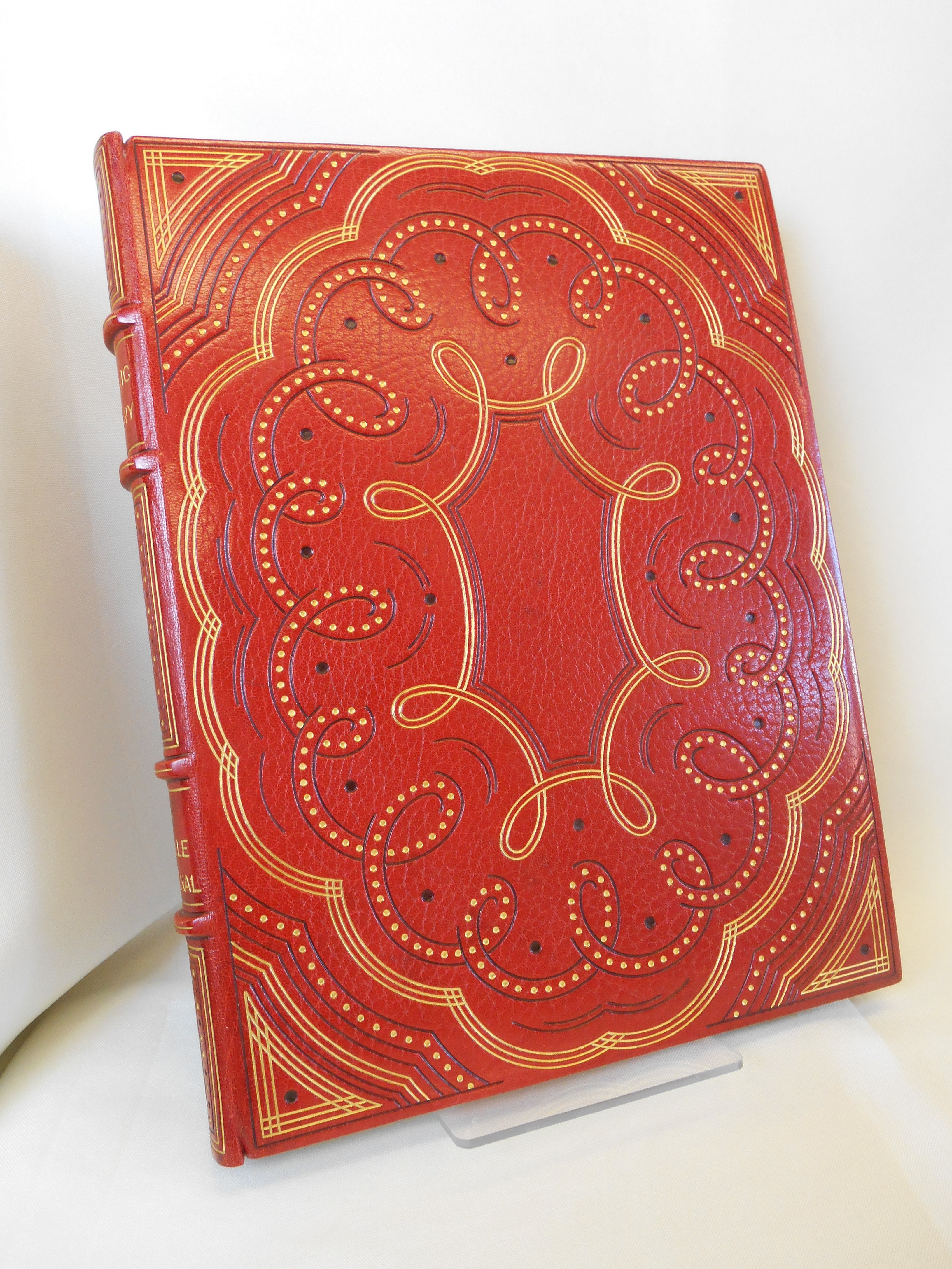 As countless collectors know, there are many different kinds of bindings in the book world. At times, the sheer number of binding styles and types can be almost overwhelming… is it leather, or some other kind of animal skin? Was type of cloth is that? Being able to decipher exactly what it is is just one of the many talents a bookseller or bibliophile must have in order to run their business.

One of the fantastic things about bookbinding is its permuting nature throughout time. Today, the verb “bookbinding” consists of many different kinds of work - often time restoration and book repairs, creating special housings for items of great significance or a fragile nature, and constructing unique forms of boards or wrappers for certain items. Today, we would like to shine some light on this last aspect of bookbinding… an artistic, one-of-a-kind specialty that many know as “Designer Bindings.” Designer Bookbinders use all kinds of book-arts (printing, paper making and decorating, hand-drawn illustrations, calligraphy, and hand-binding) to create a book as a work of art. These books and art pieces are widely collected and held in high-esteem, as no two are exactly alike - they are unique as they have been designed particularly for that one book.

One slightly problematic aspect of designer bindings is that there is not necessarily one true definition of a designer binding. Since the bindings can be done in a variety of ways using a significant variety of techniques, there cannot be a limiting definition to the art. However, one could argue that a definition would entail certain broad specifications, such as being hand-made and unique to other copies in some way. Designer bookbinders produce their own artistic books, and then do all the work themselves - the sewing, the paper placement, the boards, the arrangement of images and illustrations - all of these artistic interpretations are the designers' own, though they often reflect (sometimes however abstractly) the content of the book itself.

Though there are not a great many bookbinders in the world, often those that pursue the craft professionally are quite talented. They are able to find jobs in libraries or other government institutions, private workshops or bookshops - though the great binders seem to work for themselves alone! Some of the most talented in this day and age are binders Susan Allix, Paul Delrue and Julie Stackpole. London designer Allix uses the book “as a creative medium,” the limited editions from her private press are made with “original prints, letterpress printing and hand binding to achieve a harmonious artwork.” Most of her limited edition runs come in at under 50 copies - all of which are entirely handmade. Paul Delrue lives and works in Ruthin, Wales where while working on many designer bindings each year, he also supports and mentors numerous binders in traditional book bindings techniques. Julie Stackpole is an American bookbinder who specializes in creative fine binding using “centuries-old traditional techniques, but with a design suited to each book, [she] creates a one-of-a-kind find binding that expresses the book’s subject, graphics, time period and illustrations, thus making it… a 4-D art form.” One of the more important book binders in history was a French man by the name of Leon Gruel who worked in the late 19th and early 20th centuries. In Sarah Prideaux's book “Bookbinders and their Craft”, the expert states that the Gruel bookbinding business has always been known to be the best “for initiative in artistic matters, as well as for irreproachable execution in the detail of its many-sided achievements.”

Many bookbinders make a point of stating how their works are made to reflect the content of the book they are binding. In their own style, of course (one that could be very abstract), but still there is the single factor in a myriad of definitions for designer binding that the binding must be stylistic, unique and, most-likely, reflective of the work itself. In any case, Designer Bindings are at one time a book, a work of art, and a unique collector’s item… all rolled into one! During the holiday season be on the lookout for our next Catalogue - offering many beautifully created Designer Bindings!